What different types of our new quick connect couplings are there and where do they differ? With the help of detailed animations, these are clearly explained by our product manager.

The range of quick connect couplings is constantly being developed. In addition to standard couplings, the product portfolio now also includes quick-release couplings for special applications. From the beginning, special attention was paid to the development of coupling systems for the transfer of paints and solvents, as Schwer Fittings is represented worldwide in the paint supply sector with the self-developed and patented ECO screw connection.

The product portfolio has also been significantly expanded in the area of ​​low-pressure couplings (up to 35 bar), which were previously only available in the nominal sizes DN 5, DN 7.4 and DN 10. In addition to the addition of a further nominal diameter to the delivery program, the nominal diameter DN 19, the selection of connection sizes for the quick-release couplings compatible with the EURO profile has been increased so that the entire thread range from G 1/8 "to G 1" can now be covered. In addition, all nominal widths have recently been available as bulkhead variants.

To make it easier to distinguish between several low-pressure couplings installed next to one another, the option of colored marking has been added to the delivery program. Here, the plug and coupling are each given a colored marking made from a patented, UV-curing composite ceramic that is embedded in the material. The color marking process originally developed for medical technology is characterized by its high resistance to a large number of media and external influences, such as temperature loads. The colors red, green and blue are available as standard - up to 16 colors are possible on request.

The most important innovation, however, is the expansion of the delivery program of the low-pressure quick-release couplings by a flat-sealing and thus low-leakage variant based on the previous version. the new, flat-sealing variant is characterized by an almost leak-free uncoupling process. In particular for applications with liquid or critical media, this is an enormous advantage compared to the standard version. In existing systems there is the option of retrofitting the flat-sealing variant without having to replace the entire coupling system - only the coupling has to be replaced, the plug is Due to the special construction, it can be used for both the standard and the flat-sealing variant.

In parallel to the expansions in the area of ​​low-pressure quick connect couplings, the product line of flat-sealing high-pressure couplings up to G1 ”has also been completely revised. With the introduction of the new product line in early 2021, these will be dimensionally compatible with ISO 16028. In addition to adapting to the standard, the couplings have been optimized, particularly with regard to flow. The outer design of the coupling, especially the actuating sleeve, has also been fundamentally revised. Knurled surfaces, which are difficult to clean and in which dirt particles can easily settle, will be completely dispensed with in the future. The operability of the actuating sleeve is ensured by an ergonomically shaped, non-slip rounded profile, which is easy to clean in heavily dirty applications. Similar to the quick-release couplings from the low-pressure area, there will also be the option of colored marking for the flat-sealing high-pressure coupling.

Please log in with your login so you can see the price information.

As a guest, you can add items to the shopping cart and inquire.

The product has been added successfully.

The length of a hose assembly is always measured between the sealing heads or, in the case of angled  fittings, between the center points of the fitting. 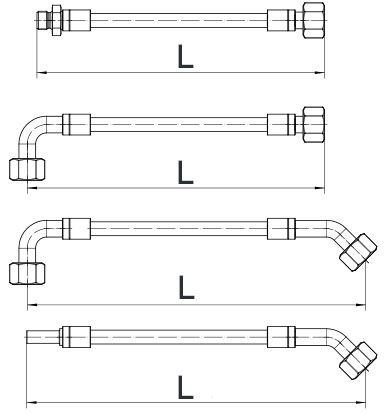 The orientation is as follows: 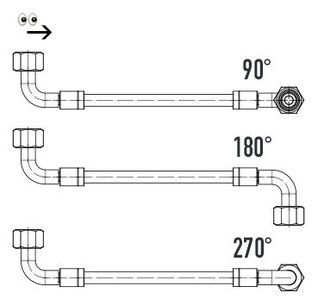